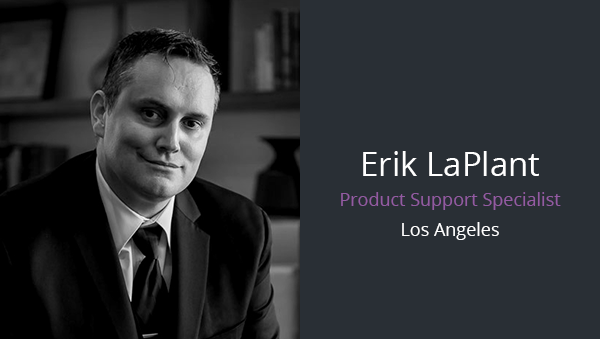 The ftrack team has seen global expansion stimulated by an influx of new users worldwide. As we continue with our growth to provide a better product and service, we’d like to introduce our exceptionally talented team to our users. One of our most notable regions of growth is in the West Coast, so we’ve extended our highly regarded support to this region with a new hire dedicated to servicing our happy clients.

To kick things off, we spoke with our newest team member, Erik LaPlant, Product Support Specialist based in Los Angeles, US – to discuss his background and experience within the industry, and how he can help your studio with ftrack.

Can you explain your role at ftrack, what is a Product Support Specialist?

I guess you could say I am the North American face of the company. My key responsibilities include: managing relationships with ftrack users, provide onsite and remote client training, educate and demonstrate ftrack features and best practices to prospective and current clients, and assist in solving support related queries. 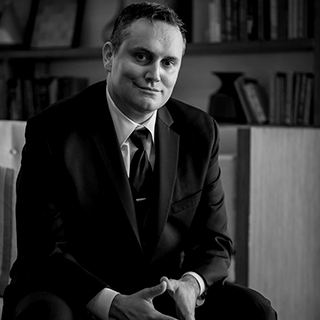 What do you enjoy most when visiting studios and speaking about ftrack?

The appreciation and, sigh of relief, from our clients knowing someone is there to listen, provide support and offer solutions to their production and pipeline needs.

I also enjoy getting to see first hand how the platform is being used by our clients and listening to their feedback to continually make improvements.

What is your background prior to joining ftrack?

For the past 10 years, I’ve been a production manager, coordinator, and digital artist at numerous VFX, animation, and game studios in Los Angeles. So I’ve seen how production teams have evolved and changed over the years across these industries. Previous companies I’ve worked for include: Riot Games, Psyop, Framestore, Rhythm & Hues and Luma Pictures amongst others.

How did you first get started in the industry?

After film school, I was working sparsely as an editor in Denver, CO. On several occasions clients had asked if I was capable of adding effects and motion graphics to projects I was cutting. Through some acquaintances, I was introduced to compositing, motion graphics, modelling and lighting using After Effects, Shake, and Maya. I really enjoyed working in these applications and began to shift my focus from editorial to visual effects and animation. In 2007 I decided to make to move from Denver to Los Angeles in the hopes of securing more work. I was picked up by Luma Pictures and started my visual effects career as an IO/Digital Coordinator. The rest, as they say, is history.

What is your experience in production management?

I have managed a variety of projects for VFX, motion graphics, and animation vendors ranging from film, television, commercials, game cinematics, music videos, print, and even Time Square billboards. Teams as large as 150 artists to as small as 4 members, including myself. I’ve often been responsible for overseeing multiple projects at the same time, whose production timelines have ranged from a weekend to a year.

What challenges have you previously faced in post-production?

Most often, asset management between multiple vendors and/or remote locations have proven difficult. There have been numerous occasions when awarded work was being distributed among multiple vendors. One example I recall is, a VFX studio I was working at was awarded a large number of shots to add background set extensions, digital doubles, FX, 3D camera tracks and final composites. These same shots were also awarded to another vendor who was tasked with animating and rendering several hero assets. We would track the plates, create a CG camera, package up a layout file and send it to the other vendor, who would then use these files to set up their scenes, animate, and render out passes. Those passes would then be sent back to us to be integrated into to our final composites. This became a logistical challenge as production shot work is iterative. Managing client feedback involved additional communication between us and the other vendor to address notes. Additionally, VFX pipelines often differ from studio to studio. So collaborating with another vendor proved to be a challenge from a technical/execution standpoint as well because the studios internal pipelines/workflows did not always align.

What are you most proud of in your career?

While at Psyop, I had the opportunity to help integrate an editorial pipeline into a VFX pipeline to quickly update project conforms and internal reviews.

Working on the feature “Take Shelter” was very satisfying and rewarding. I was working at Hydraulx and we were the primary vendor for this production. The project itself was not that big, about 100 shots give or take, but the scope of work was a lot of fun, the director, Jeff Nichols was great to work with, and the story was really well written.

What attracted you to working with ftrack?

I’ve been a big supporter of integrating project management systems into VFX and animation pipelines for quite some time. When I was first introduced to ftrack I was blown away by how it integrated into the applications the artists were already using. Seeing artist log time, access notes, and publish quickly was a real eye-opener. And I wanted to be part of a team who really understands the needs of production and artists and emphasizes the need to make these tools accessible and easy to use.

What was your first experience with ftrack?

I was brought on at Artemple as a freelance production manager to help wrap up and deliver Entourage the movie. The bulk of the work had already been completed, with a dozen or so shots in progress. I was working with a fairly small team, one show supervisor, a pipeline TD, and a handful of compositors. The first thing I noticed about ftrack, besides how relatively easy it was to navigate through, was the ftrack panel embedded in Nuke’s UI for logging time. Now, I’ve seen similar integrations on other platforms, but this really stood out because of how clean it looked and how simple it was to use.

What tip would you give to people picking up ftrack for the first time?

Give yourself time to really dive in and see what ftrack can do. It’s best to keep it simple at first. Create mock projects, tasks and shots, then build up from there.

What are your hobbies outside of work?

When not working I try to get outside as often as I can. I love the mountains. I’m an avid skier. I try to get up to the hill as often as I can. I also love cycling and fixing/building bikes. Mountain, downhill, dirt jumping, BMX, road, fixed-gear, beach cruising, you name it. And recently I started bicycle frame building and designing. I love working in a shop and getting my hands dirty.

How can users get in touch with you?
Simple! Just send an email to [email protected] and either myself or the team will get back to you.