In Isaac Asimov’s Foundation, the future is not an unknown waiting to happen, but something calculable, inevitable, and terrifying.

Foundation‘s premise is rooted in the theory of psychohistory. Developed by mathematician Hari Seldon, psychohistory comprises a highly secretive statistical formula capable of predicting civilization’s future with an extraordinary degree of accuracy. The problem in Foundation is that the formula has foretold, with no room for error, the imminent demise of the Galactic Empire and a subsequent dark age lasting 30,000 years. It’s a prediction the Empire does not take too kindly to hearing, and one that kicks of a series of events whose ripples extend into the coming millennia.

Asimov’s introduction to Foundation was first published as a series of short stories, commencing in 1942. These initial stories, and their subsequent generation-jumping follow-ups, were long deemed unfilmable in their scale and scope. Only in 2021 did Apple TV+ take the plunge with a new high-budget, prestige sci-fi series from co-creator, executive producer, and showrunner David S. Goyer. Over 80 episodes and eight seasons, Apple TV+ plans to finally turn Asimov’s sci-fi novels into a stunning space-spanning experience that honors the original books while treading new ground all of its own.

No less than 22 visual effects companies signed on to help create the universe that, before now, existed only in Asimov and his readers’ collective imagination. Supervised by Chris MacLean and Michel Enriquez, these vendors will take what was once considered unfilmable and turn it into a rich new world for audiences to explore. Below, we speak with three of these vendors—DNEG, Rodeo FX, and Important Looking Pirates—about the first few episodes of Apple TV+’s ambitious new series and how cineSync helped unite the show’s spectacular visual direction. 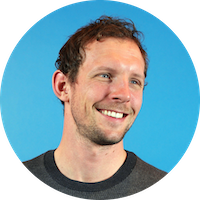 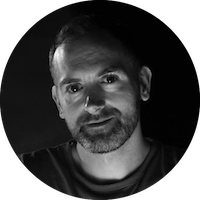 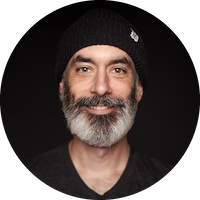 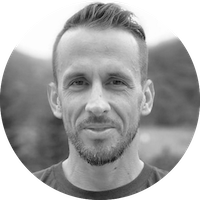 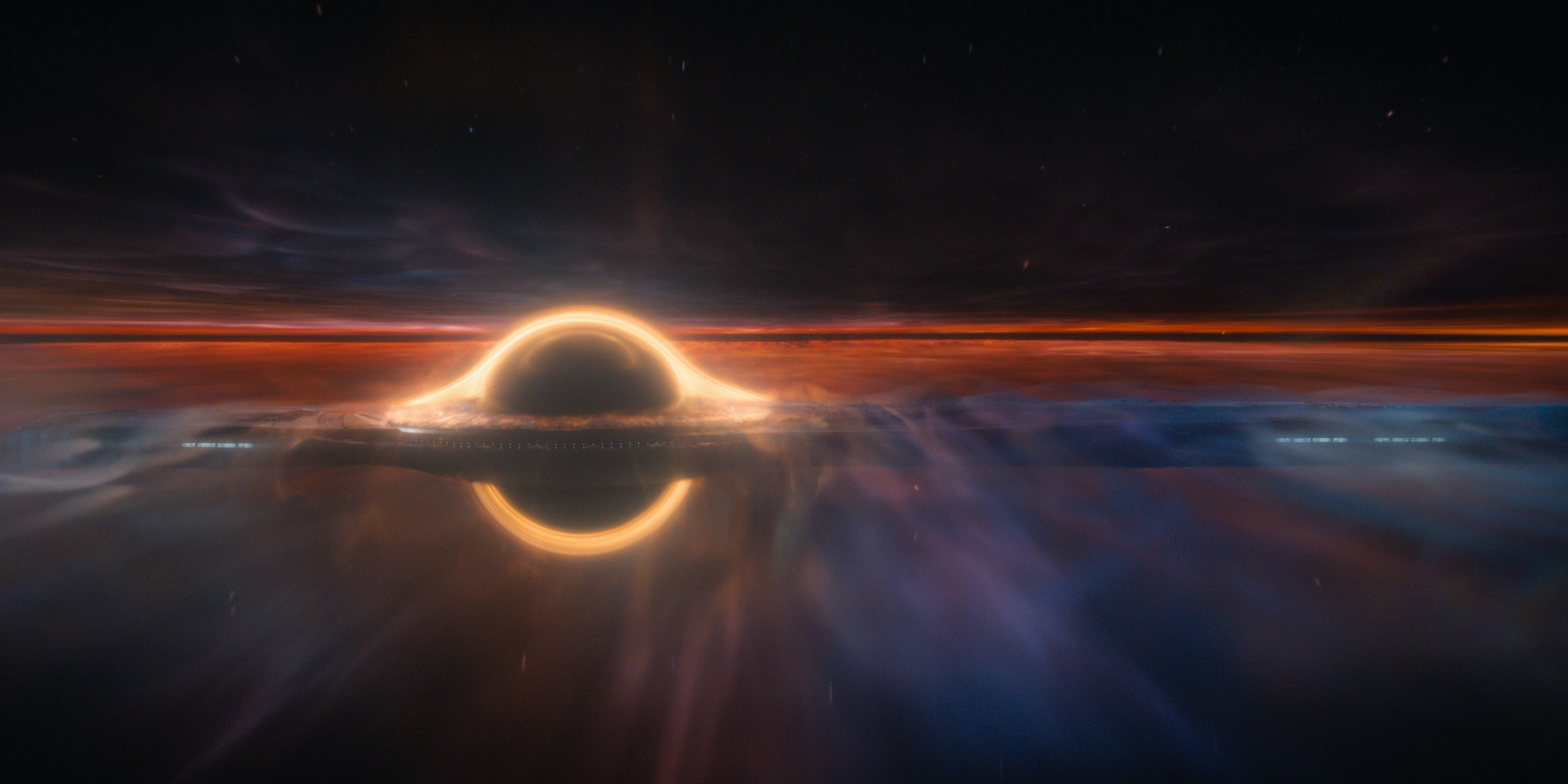 Creating a Foundation for success

As with many projects in production in 2020, Foundation was hit by the coronavirus pandemic right when shots needed to come together: lockdown necessitated the entirety of post-production to be completed by artists creating from home. cineSync assisted with the transition as artists remotely collaborated and communicated on shot iteration.

“We used cineSync to stay connected, which is so widespread and widely supported that it is the standard for media review,” states Chris Keller, VFX Supervisor at DNEG. Chris and his team used cineSync in the construction of Trantor, for example, which serves as the homeworld Foundation‘s Galactic Empire. Below Trantor’s planetary surface sprawl are some fifty layered cities, one stacked on top of another.

“To create Trantor, we used a tool in Houdini to create procedural buildings based on certain rules and boundary boxes that we fed it, enabling us to achieve the city on such an incredible scale,” Chris explains. “We created all of these interstitial elements between buildings like bridges, platforms, and megastructures spanning thousands of meters from one level of Trantor to the next. You can also see hyperloop trains and flying vehicles, and if you look closely, you can see that the way the crowds move through this vast space isn’t random. We based the whole cityscape on real city planning, a lot of research into futurism, and thinking about the history of Trantor.” 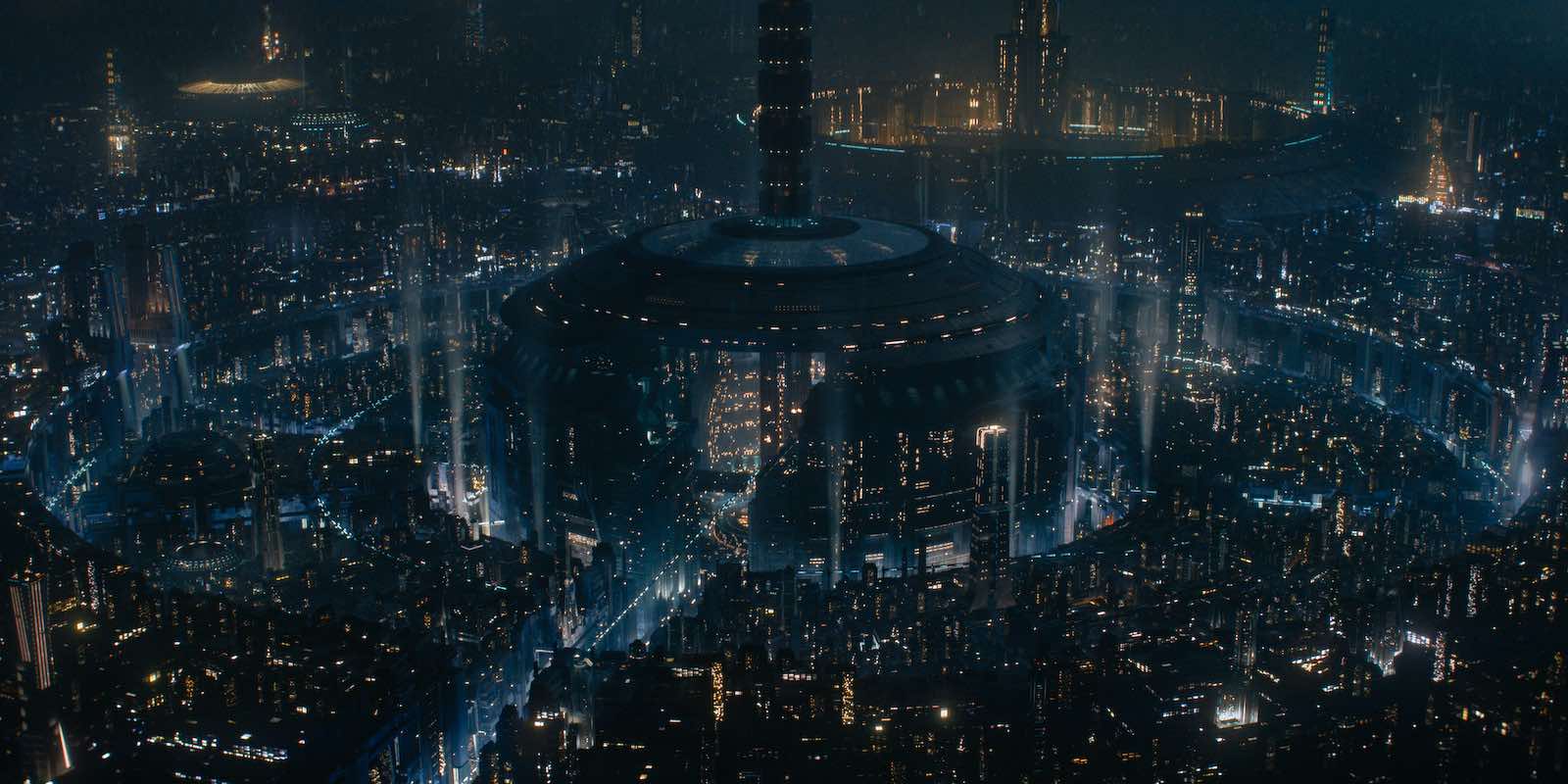 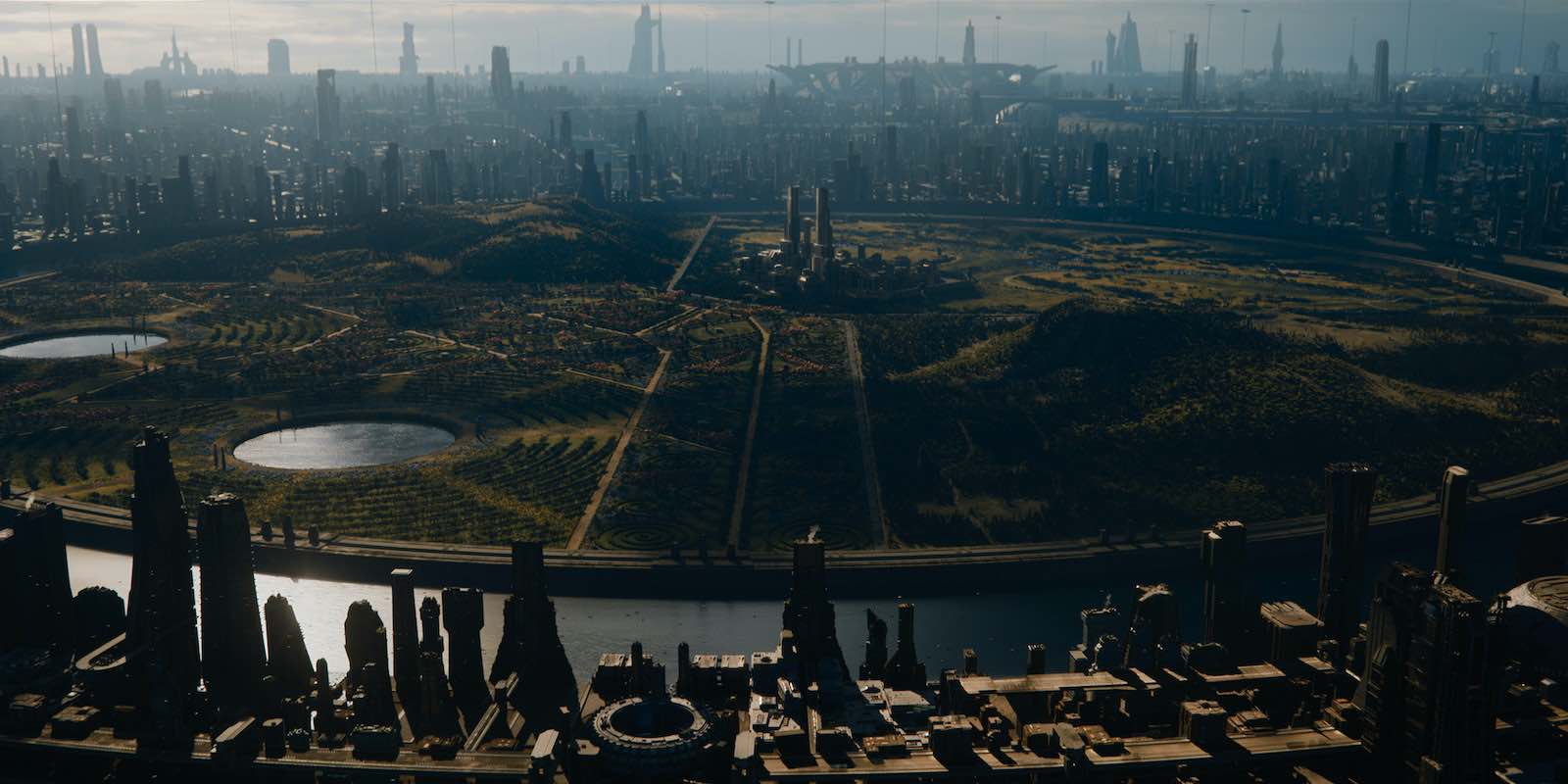 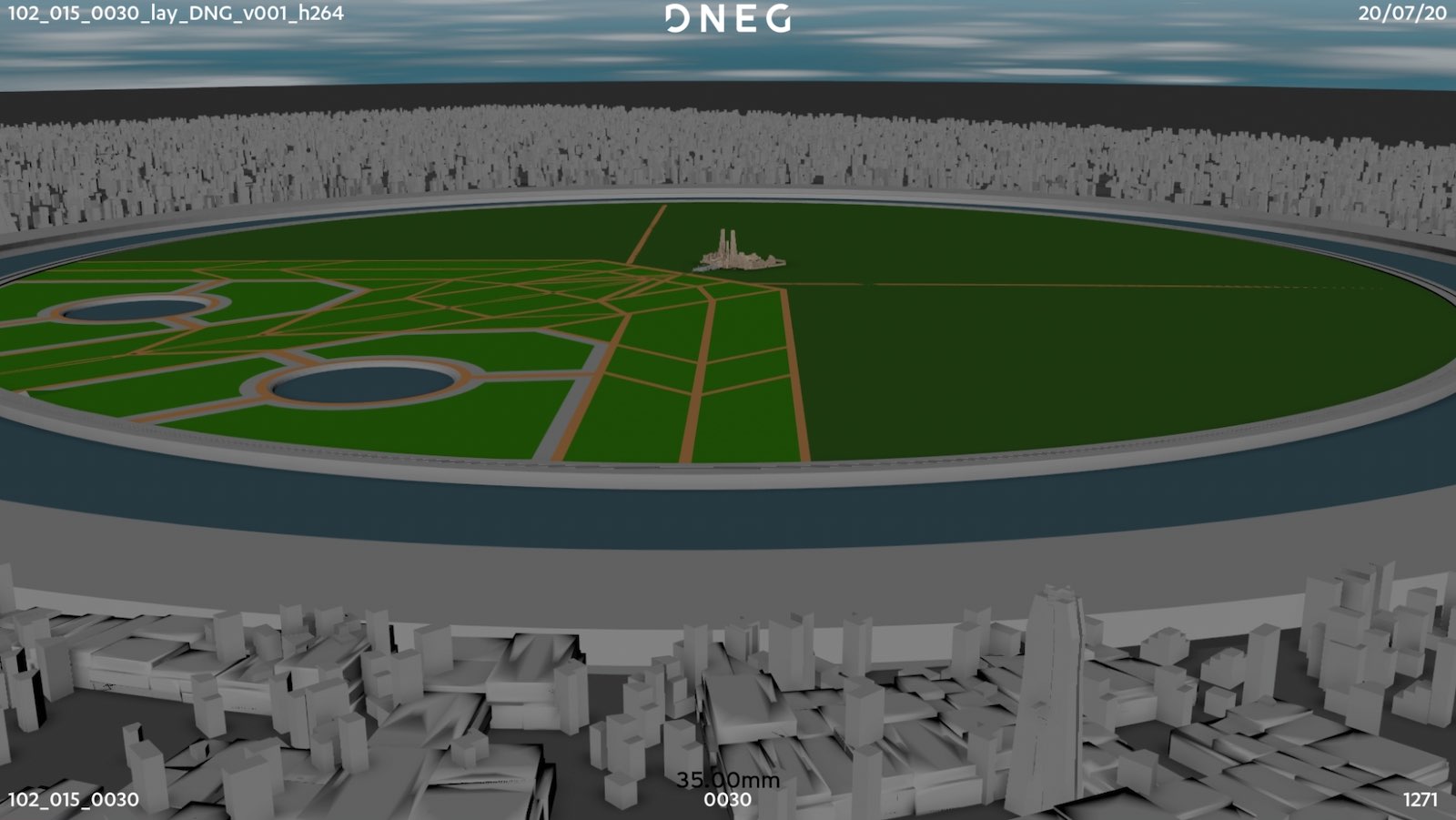 Another feature regularly discussed in cineSync sessions was the Sky Ceiling. “Each mega-floor of Trantor has an artificial sky called the ‘Sky Ceiling’ comprised of circular LED panels,” says Giovanni Casadei, DFX Supervisor at DNEG. “Designing the Sky Ceiling was a challenge: you had all these different skies to think about, and sometimes you would see the ‘sky’ of one level from trenches on the floor above it. We had to sell the idea of these skyscrapers/supports going through each ‘sky’ on their way to the next floor. There was a lot to think about. We had to dial in a fine balance between making the Sky Ceiling photoreal while making it descriptive for the audience. Designing that for the client was incredibly fun.”

One significant story point in Foundation sees Anacreon and Thespi terrorists destroy Trantor’s Starbridge—a 40,000km tether-like space elevator that comes crashing down onto Trantor, resulting in colossal damage. Steven Moor, CG Supervisor at DNEG, worked on the sequence: “My favorite shot is when the tether falls through Trantor’s layers,” he says. “What made this shot challenging is that each layer of Trantor can have a different time of day, atmosphere, and weather. The Sky Bridge destruction shot scene takes place during nighttime, but it’s daytime in the upper layer, so effects caches emit a lot of the light. You can see light pouring through the upper layer and parts of the Sky Ceiling flickering and switching on and off. We were tracing all of this destructive geometry and the volumes. It made for an amazing image.” 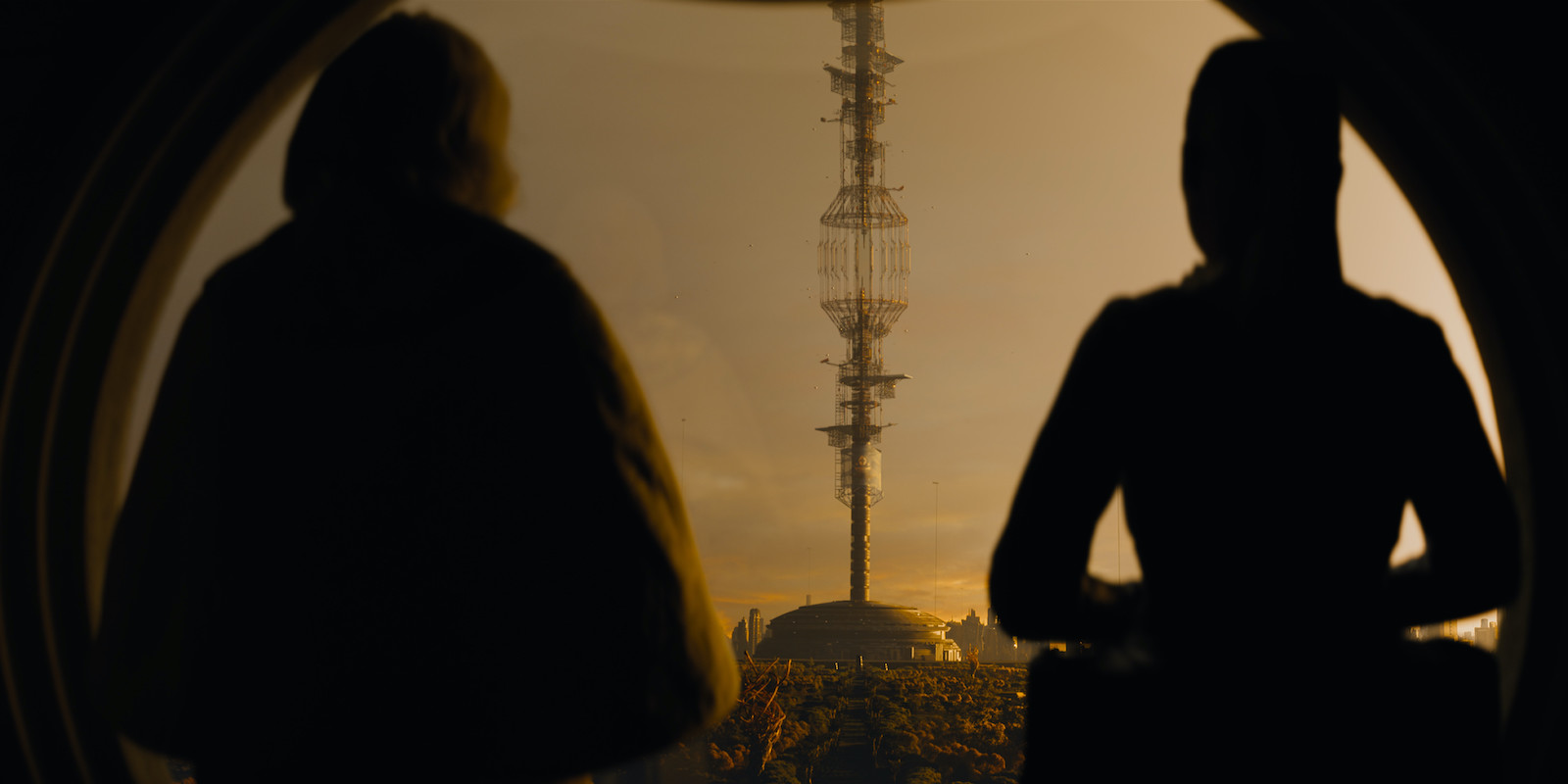 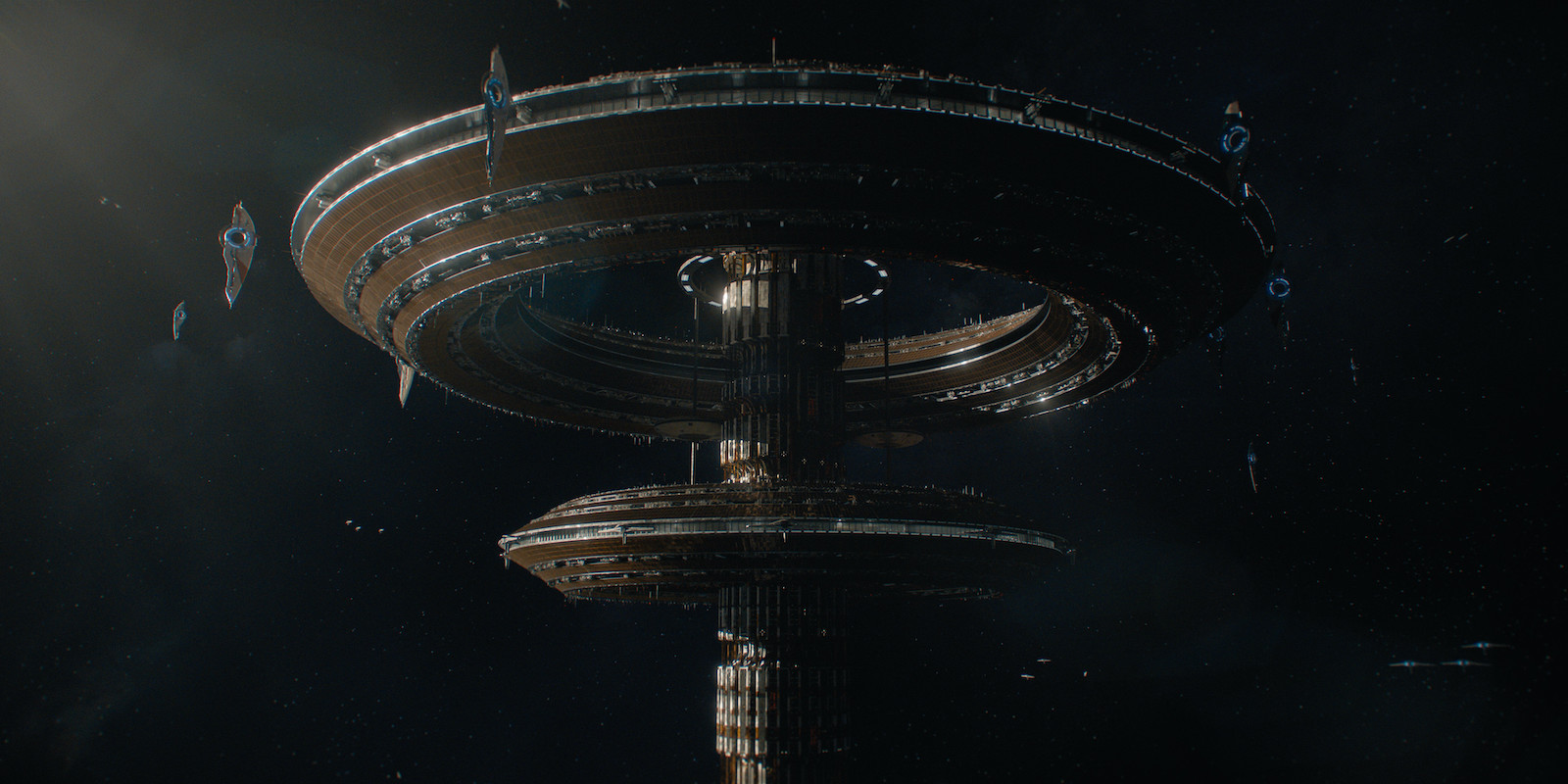 The destruction of Trantor leaves an ugly disfigurement scored into the planet’s surface, known affectionately as the Trantor Scar. Initially, the Trantor Scar was intended as a miniature, but the need for on-the-fly art direction led the effect to become entirely CG, courtesy of Rodeo FX.

Arnaud Brisebois, VFX Supervisor at Rodeo FX, and his team looked at earthquake-damaged buildings for reference. “I wanted to reference where buildings had collapsed under their own weight,” says Arnaud. “Damage like that worked well to convey the idea of the tether having crashed down onto buildings and ripping them open with a strong vertical pull.

“For the mega-floor destruction, I gathered a catalog of collapsed bridges. I also looked at large explosions and the smoke plumes produced by burning chemicals, which I provided to the FX team as a reference. I also referenced building fires and deconstructed the various stages of burn damage they displayed for the surface-damaged structures.

“I reviewed these shots with VFX Supervisor Mike Enriquez in cineSync, which is a proven tool and always works well,” continues Arnaud. “Although the brief was precise in the basic requirements for each shot, there’d be a lot of room to propose ideas. For example, we would run through shots of the scar, Mike would describe what was needed from the story/editorial and design standpoints, then off we’d go to create the effect. It’s great, not to mention quite unusual, for such a large-scale project to present an open opportunity to participate in the creative process and make proposals feel welcome and appreciated. Being able to do so on Foundation made for a special project.”

”We used cineSync to stay connected, which is so widespread and widely supported that it is the standard.

Hari Seldon’s psychohistory theory is impenetrable to most, but not to Gaal Dornick—a mathematical prodigy who leaves her homeworld of Synnax to study under Seldon as his protégé. Synnax is a water planet, where houses are built directly over a vast and beautiful sea—all of which was handled by the Swedish visual effect studio, Important Looking Pirates.

“We designed the whole Synnax village and extended the practical build, as well as doing some full-CG shots,” explains Nicolas Hernandez, VFX Supervisor at ILP. “We wanted to have a lot of control in compositing, so all of the Synnax set extensions were rendered as 3D layers.”

“We created the starfield above in 3D using Nuke, which allowed us to control the stars’ frequency, intensity, and position,” continues Nicolas. “The atmospherics were created in 3D, too: we rendered each cloud as a volume and scattered them in a controllable way to ‘cloudscape’ the sky. We also created a 3D nebula so we could control its look and shape and ensure we lit it appropriately for the ambience of the shot.” 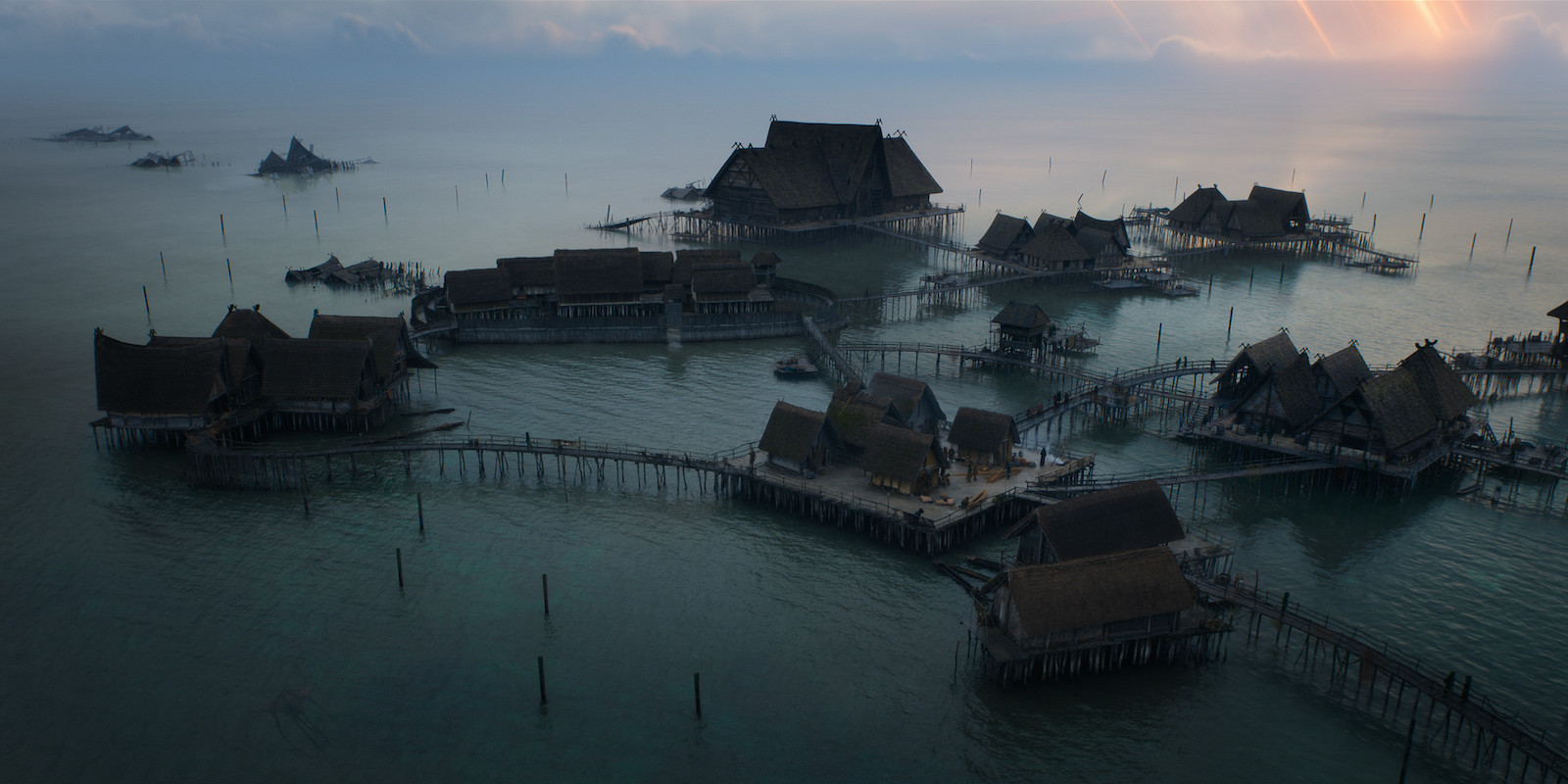 Creating Synnax’s vast ocean surface—and the creatures that reside below it—also required input from the ILP team. “For the ocean surface, we created a lot of procedural noise and used geometric specifics—like the curvature of the peak of the wave as maps—to achieve subtle details. We also added realism to shots via neat visual tricks. For example, wherever a large object occluded the wind, we’d add fewer ripples on the water.

“As for the Sea Siren—the fully CG aquatic creature that rises to the ocean surface to interact with Gaal—we were inspired by stingrays and deep-sea fish, but with even more otherworldliness,” says Hernandez. “There’s a lot of detail to the Sea Siren. For example, the creature is translucent in some areas, and we painted iridescent spots on it that react to the light.”

Again, cineSync played a crucial role in dialing in the desired visual aesthetic at ILP. “We used cineSync when we received the first turnover to ensure we understood the creative brief and could draw out the overall picture together,” remarks Nicholas “cineSync enables us to have a synchronized vision as we discuss and iterate on shots.” 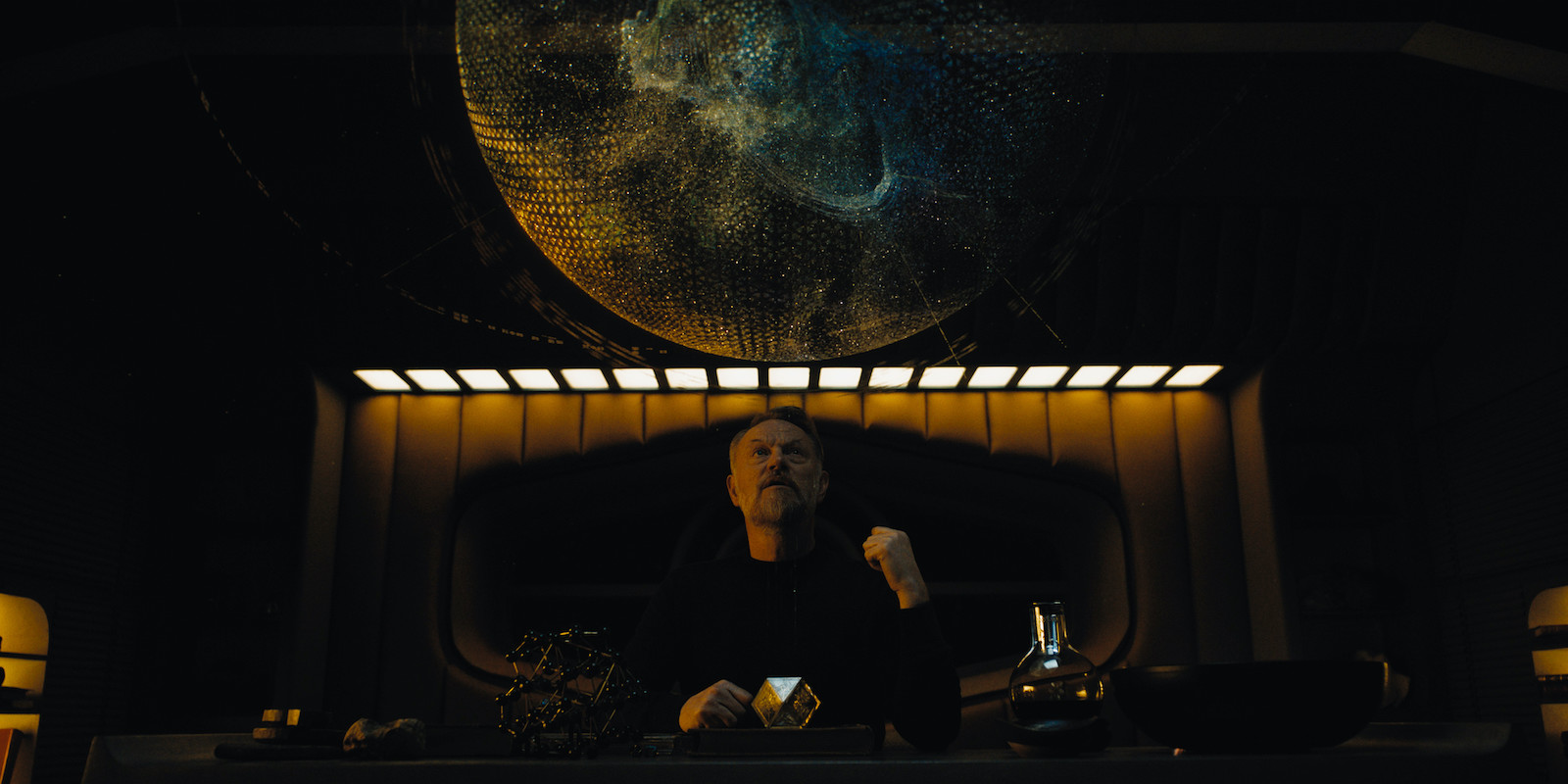 Isaac Asimov first started building out Foundation‘s world in 1942, and over seven novels, he built out a rich and extensive sci-fi world of enormous scope. It’s taken television 80 years to catch up with Asimov’s far-reaching imagination, and what we’ve seen so far still only scratches the surface of the author’s operatic vision. But there’s still so much to come.

We can’t wait to see where Apple TV+’s series takes the Foundation story next. We keenly look forward to seeing visual effects by DNEG, Rodeo FX, ILP, and more shape the narrative as we follow Seldon’s psychohistorical prophecy through time and space. 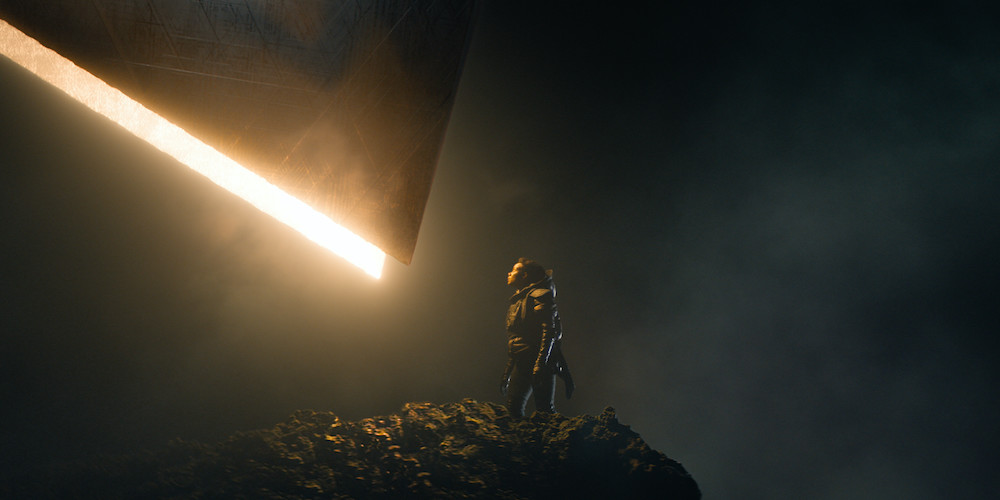