A beginning is a very delicate time. For 2021’s Dune, it came when a teenage Denis Villeneuve first read Frank Herbert’s novel.

Ever since that first reading, Villeneuve was eager to adapt Herbert’s mythic sci-fi for cinema; but such efforts have proven challenging. Herbert’s expansive imagination doesn’t lend itself to straightforward adaptation.

The story, which focuses on the planet Arrakis (aka Dune) and the sought-after narcotic it produces, features multiple political houses vying for power, indigenous Fremen fighting for their home, the pseudo-religious Bene Gesserit, and, wrapped up in all of this, the young Paul Atreides (Timothée Chalamet), whose fate is inextricably linked to that of Arrakis.

Yet for all this complexity, Villeneuve’s latest effort to unravel Herbert’s story is a success, thanks to a rigorous faithfulness to the source material, a methodical pace (half the story is saved for another film), and a world brought to life with filmmaking tech unavailable to prior essayers.

Indeed, Dune‘s VFX are favored to win at the 2022 Academy Awards. When watching the film’s cathedral-like starships, operatic battles, and gigantic worms churning through spice-tinted sand, it’s easy to see why.

Read on to discover how the team achieved such effects—and how cineSync played its part. 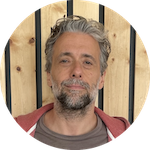 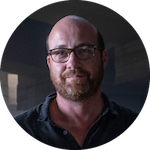 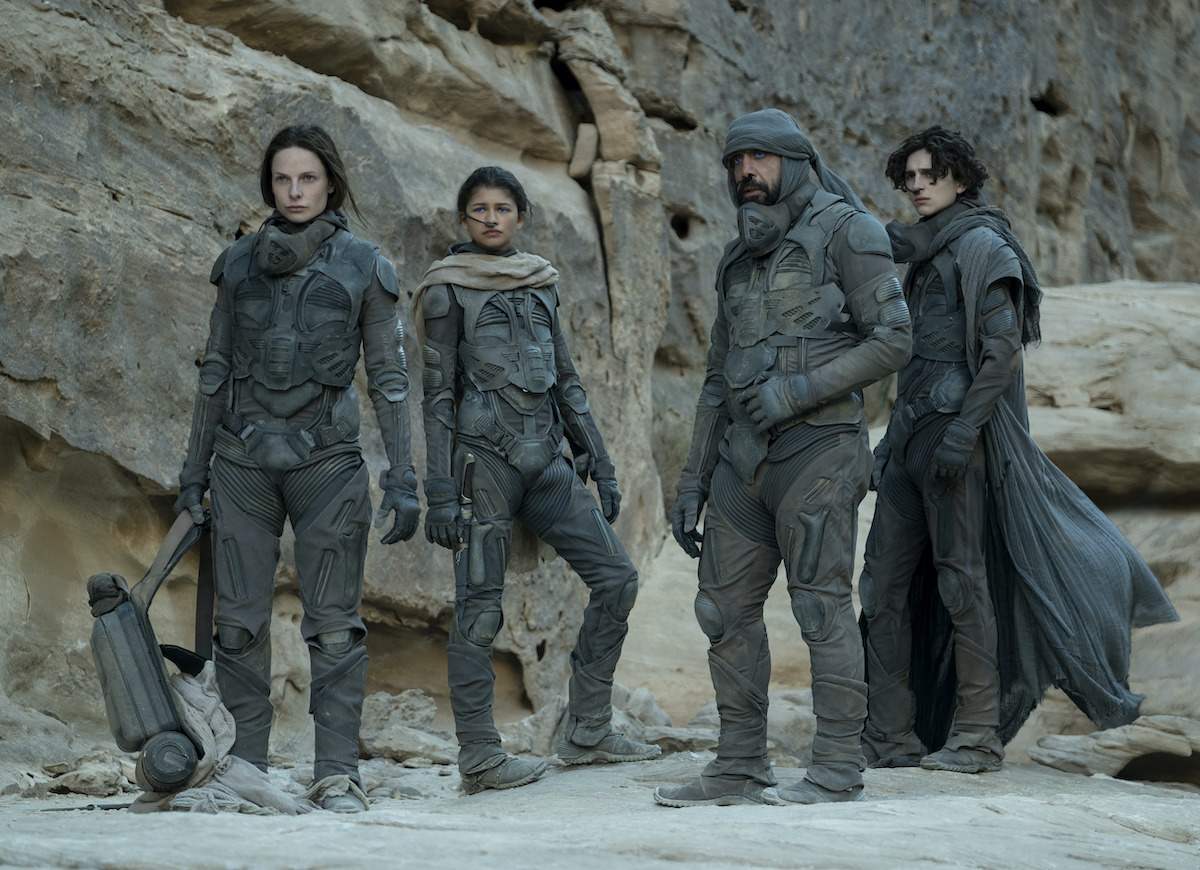 From Blade Runner to Dune

Together, Paul and Gerd oversaw some 1,700 visual effects shots delivered by DNEG, Wylie Co., and Rodeo FX. As with most productions underway in 2020, the process was complicated by the global Coronavirus lockdown, but established tools eased the transition to a remote workflow.

“We used cineSync to work with the facilities as they created shots,” begins Lambert. “During the pandemic, we’d work with Denis in Montreal, myself in California, and DNEG in Vancouver. Media review in cineSync kept Dune going even when we were all displaced and multiple people were working from home!”

”cineSync kept Dune going even when we were all displaced and multiple people were working from home.

cineSync played a crucial role in keeping creative teams aligned across Dune‘s 1,700 shots, many of which involved creating the worlds of Arrakis and Caladan, the Atreides homeworld.

“I also read the book when I was a teenager and enjoyed the worlds Herbert had created. Denis had such an exciting vision for it all,” says Patrice Vermette, Production Designer on Dune. “Denis showed me some sketches he had worked on with Concept Artist Sam Hudecki, along with some images by photographer Richard Avedon. We often referenced such source material when conceptualizing environments like Caladan.”

Audiences experience Caladan during Dune‘s first act. The ancestral homeworld of House Atreides, Caladan is as far removed from Arrakis as the Pacific is from the Sahara. Caladan is a water world where constant rain falls upon undulating, boundless expanses of ocean. The plates for Caladan’s environment were shot in Stadlandet, Norway, to be built upon by the visual effects and production teams.

“For Caladan, Denis and I tried to mimic the Canadian autumn season on the East Coast,” notes Vermette. “It’s not too warm or cold. There’s always a mist. You have the sea, moss, rocks, and the blue water and sky. That was the setting.”

The move from Caladan to Arrakis is jarring, with greys and blue replaced by searing yellows and orange. The production team turned to the Middle East and Jordan for inspiration. “The rock formations where the indigenous Fremen hide were shot in Jordan, and the city of Arrakeen was based in an area in Wadi Rum that we extensively surveyed.”

What’s most striking about Arrakis isn’t its endless seas of sand, but what lurks below: the Shai-Hulud—behemoth worms that travel beneath Arrakis’ deserts. cineSync sessions helped to build out the worm’s ominous, mythical physicality, as well as the simulations required to communicate their impact on the dunes through which they travel.

“We were working with these correlations between water and the sand of this deeply arid planet and how the creature displaces the world around it,” says Lambert. “As the worms move, you see these massive waves and ripples on the sand that almost have the fluidity of water. We created heavy sand simulations there to create a sense of worm movement as sand banks collapse and reform.”

The production also used practical effects to create shots of moving sand, such as a 6×8 meter, 2 cm thick steel sheet connected to a high-powered vibration engine. “We buried the sheet a foot deep in the sand,” says Nefzer. “The vibrations would cause the sand to produce interesting shapes, or to cause people to partially sink into the sand when a worm is on the way.”

This wasn’t the only area in which practical effects played a large part.

For all practical purposes

To navigate Arrakis while avoiding sandworms and dehydration, the Atreides use a variety of aircraft, some large, some small. The most curious is the ornithopter, a dragonfly-inspired aircraft pulled straight from Herbert’s novels, whose wings beat in a threshing blur of movement to create uplift.

Although the ornithopters appear in many CG shots brought together with help from remote review in cineSync, the aircraft also appeared in numerous practical shots. “The philosophy was to keep everything as practical as possible and use visual effects to augment the photography,” explains Lambert.

“On-set, we built a two-seater ornithopter cockpit on a 360-degree gimbal, surrounded by sand-colored screens,” continues Nefzer. “Using the overhead crane gimbal, we could puppeteer the ornithopter and create a fling movement using large steel cables attached to hydraulic cylinders. We shot Paul and Lady Jessica Atreides (Rebecca Ferguson) flying around in that cockpit. When they’re upside down, we used stunt performers with a camera behind them.” 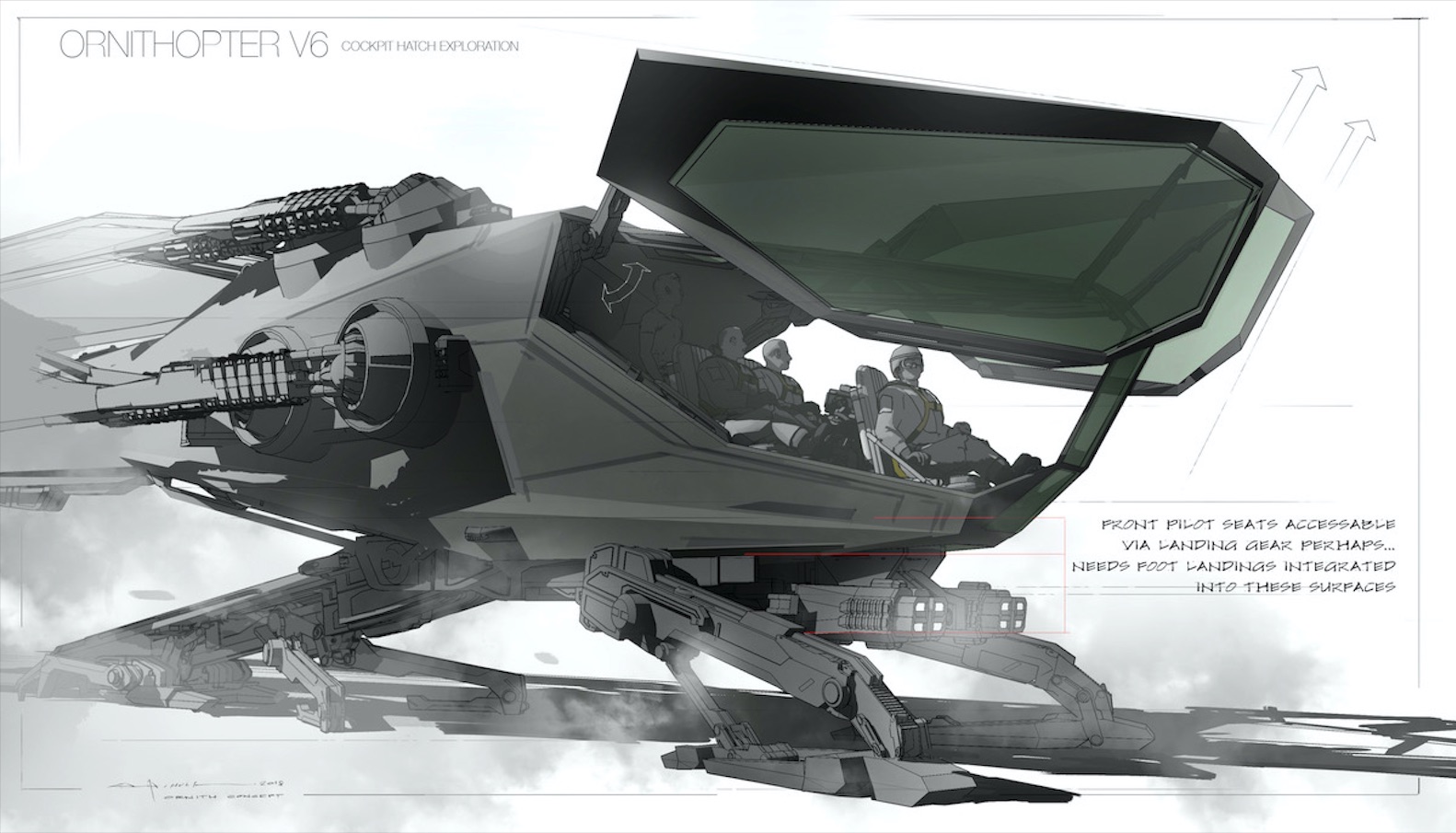 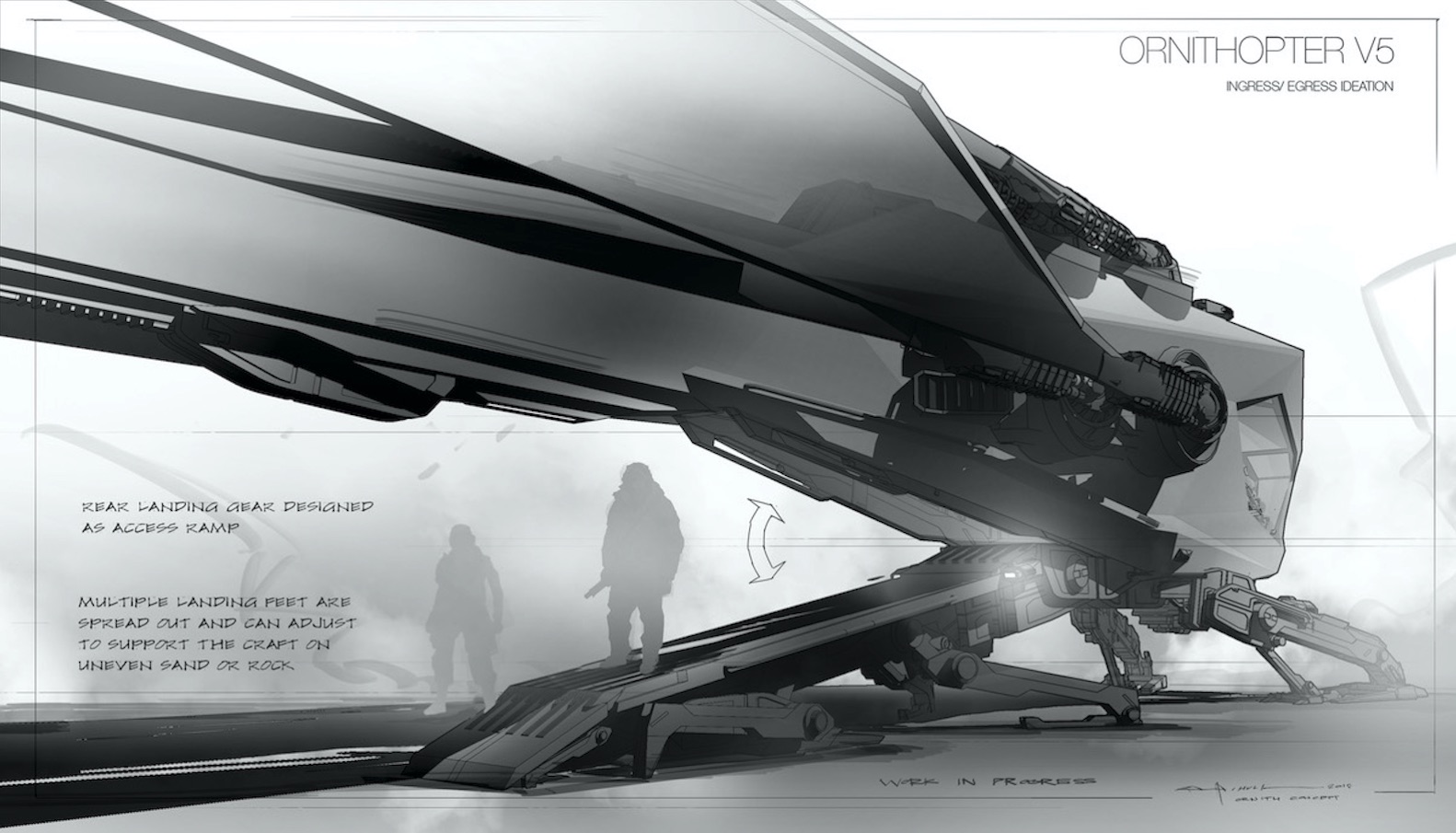 Practical effects were also important with regards to more minor details throughout Dune, including the atmospherics. “Denis and our Director of Photography, Greig Fraser, always wanted some kind of atmosphere in shots, even if it were only wind. Everything had to feel tactile and real,” notes Nefzer.

“It reminded me of an early meeting on Blade Runner 2049. The producer said to me, ‘Denis is Canadian and knows everything about snow and rain. Please make sure it looks as real as possible; this is important for Denis.’ The situation was similar on Dune. So, when Patrice Vermette went to Jordan for the first time, I asked him to return with sand samples so we could match the dust to the sand color. For Denis, such details needed to be consistent across all scenes, whether we shot them in the backlot, Budapest, or Jordan.” 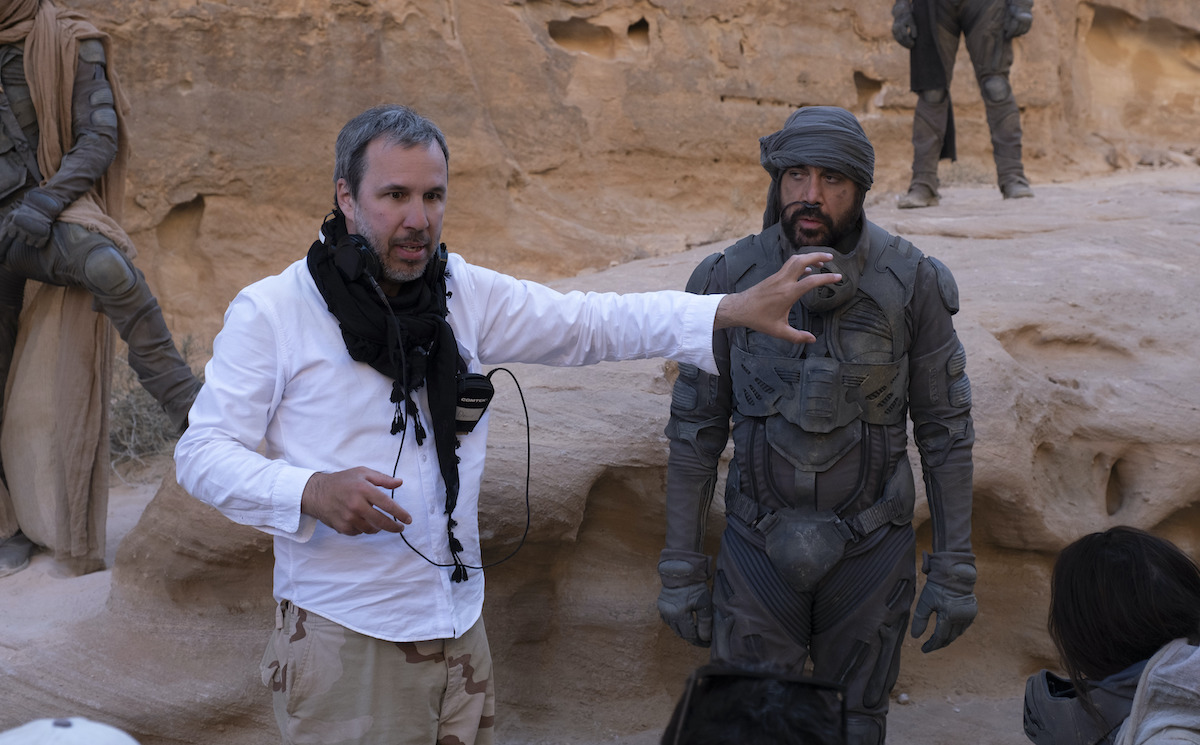 Editor Joe Walker is a frequent collaborator with Villeneuve, having worked with the director on every film since Sicario. “Frank Herbert’s universe is hugely detailed, so one wants to honor the book as well as Denis’ deviation to it,” he says. “So, throughout Dune, we were trying to preserve as much of its detail while also doing the most important thing: making Paul Atreides’ journey and those who orbit him clear and compelling.

“The great delight for me was hearing people who saw Dune came to the end of it wanting more. Hearing such things is a testimony to the amount of care Denis and I took in shaping the film […], in making sure the storytelling was powerful and that the film’s rhythm drove things forward. It wasn’t just about speed.”

And nor should it be. Herbert’s Dune is storytelling on a grand scale—cramming all of its detail into a two-hour experience would be to do the story an injustice. Thankfully, Dune has proven a commercial success: the box office and critical reception have been such that Legendary Pictures and Warner Bros. have already greenlit a sequel, which will cover the second part of Paul Atreides’ revolt and accession to power.

Like Paul Atreides undergoing a spice-induced fever dream, we predict great things from what’s to come.

Explore cineSync and discover how it can keep global teams in creative sync. 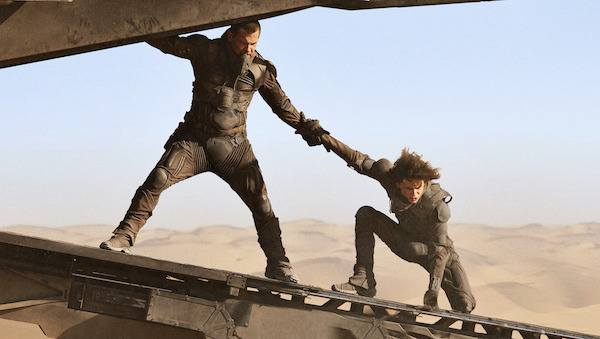